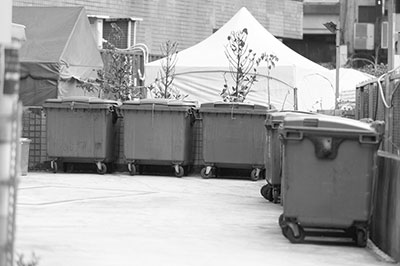 Contractual indemnity and defense is a frequently litigated issue in Louisiana. Although the case law is fairly clear and consistent, the contractual language is not always so.

In Ponder v. SDT Waste and Debris Services, LLC, et al, 15-1656 (1st Cir. 8/16/17), the issue arose in the context of a dumpster provided to a restaurant. Plaintiff was employed by the restaurant when he claims that he was injured when the wheels fell off of a garbage dumpster causing it to fall on his foot. He sued the owner of the dumpster, SDT, claiming that the dumpster was not kept in a reasonably safe condition.

SDT filed a third party claim against the restaurant, Stroubes Chophouse. It cited a contractual provision which stated:

Customer agrees to defend, indemnify, reimburse, and hold harmless
the Contractor, its officers, agents, and employees, from and against
any and all liability, suits, legal proceedings, demands, judgments,
settlements, fines, damages, costs, loss of any kind, and attorney’s
fees arising out of, incident to, or resulting from any work or services
done pursuant to this Agreement, theft of or damage to Contractor’s
equipment, and/or use, operation, confiscation, or impoundment of
Contractor’s equipment.

The case was before the Court of Appeal on a Motion for Summary Judgment which was granted in favor of SDT. The Court correctly applied the law and reversed the granting of the Motion in favor of SDT.

Louisiana law is clear in that indemnity provisions will not be construed to indemnify the Indemnitee against losses resulting from his own negligence unless such an intention is expressed in unequivocal terms. General words are not sufficient.

The Courts basically require that the Agreement state, in clear terms, that the parties have agreed to indemnification and defense for the Indemnitee’s own negligence. General words like, an Agreement to indemnify for “any and all liability” are insufficient.

SDT also argued that it had relinquished control of the dumpster to Stroubes which made Stroubes responsible for it. The Court found that this was a comparative fault argument and not a factual situation which would result in indemnification. As a result, SDT’s claim for $39,000.00 in attorney’s fees and the $35,000.00 settlement with the plaintiff were denied.

In Brice v. State Farm Mutual Automobile Insurance Company, 51,393 (2nd Cir. 6/21/17), the plaintiff challenges the validity of the UM waiver by his employer.

The plaintiff was injured in an automobile accident in which the tort feasor had minimum $10,000.00 policy limits. A commercial auto policy had been issued to Baxter International, the plaintiff’s employer and owner of the vehicle he occupied in the accident, by Old Republic Insurance Company. Baxter is a multi-national corporation with vehicles in all 50 states.

The plaintiff challenged the validity of the UM form because it did not have the appropriate policy number on the form. There are several decisions which have denied this argument, and the Second Circuit did so again. The law that the policy number is not required on the form is well established at this point. There are practical considerations with this. Many times, a policy has not yet been issued when the insured signs the waiver form with his application for coverage.

The plaintiff also argued that because the appropriate representative of Baxter did not actually fill out the form, it was invalid. This argument was based on previous cases which the Courts have found waivers invalid when an insured signs a blank form and an agent later fills in the rest of the waiver. However, in this case, the Baxter Casualty Insurance Manager testified by Affidavit that it was her job to acquire and coordinate insurance coverage. She signed forms for all 50 states at one time. The election of $100,000.00 of economic only UM coverage with a $5,000,000.00 liability limit in the policy was previously filled in. She further testified that she read and signed the form and made the selection knowingly. As a result, the Court found the waiver valid.

In Thibodaux v. Arvie, et al, 17-625 (3rd Cir. 8/31/17), a motorcyclist made a claim against his UM insurer which included a claim of bad faith for failing to tender a reasonable amount for the undisputed injuries he suffered. The plaintiff motorcyclist claimed that the tort feasor turned left in front of him and caused him to have to take evasive action which involved laying his motorcycle down. The motorcyclist admitted he was traveling at least 65 MPH in a 45 MPH zone. He received a citation for speeding and inattentiveness. The left turning motorist was not issued a traffic citation.

Progressive, the UM insurer, refused to make a tender because of the liability issues. They filed a Motion for Summary Judgment on the bad faith issue contending that it could not be in bad faith because of the questionable liability of the tort feasor in the case. Progressive contended that
the insured motorcyclist was overwhelmingly responsible for his wipe-out.

There was a dissenting opinion from one of the three Judges on the Court of Appeals. He made the very good point that if there is a reasonable liability dispute, how can the insurer be arbitrary, capricious, and in bad faith? Bad faith means that the insurer had no good reason to fail to pay. If comparative fault was acknowledged to be a major issue, how could the UM insurer be unreasonable and in bad faith?

Another bad faith case against an insurer was Dodge v. Sherman, 17-70 (3rd Cir. 6/7/17). In Dodge, the insurer issued a $30,000.00 policy to the defendant/tort feasor. There were several claimants. The insurer paid its limits to a number of the claimants, but Mr. Dodge did not receive any of those payments. He asserted that the insurer was in bad faith for settling with other claimants and not paying him anything.

The insurer filed a Motion for Summary Judgment on the bad faith claim. Unfortunately, the trial Judge denied the motion. Fortunately, however, the Court of Appeal summarily reversed that denial. It found that there was no provision in either of Louisiana’s bad faith statutes which provide
cause of action for a third party claimant in this situation.

Another recent bad faith case was Jones v. Government Employees Insurance Company, 16-1168 (4th Cir. 6/14/17). This case also involved a bad faith claim against a UM insurer and was before the Court of Appeal on Motions for Summary Judgment by the plaintiff and defendant. The trial court found in favor of the plaintiff and granted a summary judgment finding that GEICO had acted in bad faith in the handling of the UM claim. In this case, the Court of Appeals defined bad faith under the Louisiana Statute as being synonymous with “vexatious”. A vexatious refusal to pay is unjustified, without reasonable or probable cause or excuse. Only when the facts negate all probable cause for a non-payment should penalties be imposed. The determination is based upon the facts the insurer knows at the time it takes its action. Where there is a reasonable basis to defend a claim, an insurer is in good faith in relying on that defense.

In this case, there was a legal issue about whether or not Georgia or Louisiana law applied to the coverage issues. The policy was issued in Georgia based upon the Georgia address provided by the plaintiff.

Finally, Williams v. Security Plan Fire Insurance Company, 16-714 (5th Cir. 5/31/17), dealt with the amount of damages which can be awarded for bad faith failure to pay a first party property damage claim. In such a case, two Louisiana bad faith statutes apply. R.S. 22:1973 provides for damages “sustained as a result of the” bad faith. In that situation, the plaintiff has to prove some actual damage which resulted from the insurer’s failure to pay. Alternatively, the statute maintains a $5,000.00 minium penalty if the insured cannot prove any damages.

The other bad faith statute, R.S. 22:1892, provides for 50% of the amount due from the insurer and a reasonable attorney’s fee.

The trial court incorrectly applied § 1973 and awarded the plaintiff double the amount of the claim or $32,162.46. The Court of Appeal reversed that because there was not proof of actual damage. In fact, there is a Supreme Court case from 2011 directly on point which the trial court apparently ignored. There has to be proof of actual damage or the plaintiff is entitled to an award of the minimum $5,000.00 penalty under § 1973.

The plaintiff gets the choice between the two statutes. Because there was no proof of actual damages, the 50% of the amount due plus the reasonable attorney’s fee was the better result for the plaintiff.

Davis v. NOLA Home Construction, LLC, et al, 16-1274 (4th Cir. 6/14/17), involved a claim against a contractor for the faulty construction of a house, failure to complete the construction, and failure to repair the faulty workmanship. In essence, this was a suit for breach of a construction
contract. The contractor’s insurer was named as a defendant in the case. The insurer issued a commercial general liability policy to the contractor with the ususal exclusions – “damage to your product”, “damage to your work”, and “damage to impaired property or property not physically injured”.

This case went to trial and the Judge rendered a verdict in the insurer’s favor. However, on a Motion for New Trial, plaintiffs argued that they were entitled to the coverage under the policy because the exclusions had never been specifically asserted in the answer. The new trial was granted and the insurer was cast for the full amount of its $1,000,000.00 policy limits.

On appeal, the insure argued that it pled “all policy provisions and exclusions” as a defense in its answer. This is clearly not sufficient in Louisiana, and the Court of Appeal affirmed the Judgment in favor of coverage.

This was an elementary mistake by the insurer’s attorneys. The insurer ended up being cast in Judgment for $1,000,000.00 when there was no coverage because of this mistake.

Please remember that any of these cases could be subject to further review and reversal by the Supreme Court and/or further jurisprudential or legislative action. The law is continually changing. Therefore, always look to update the cases and the law before relying on any particular
holding and seek competent legal advice