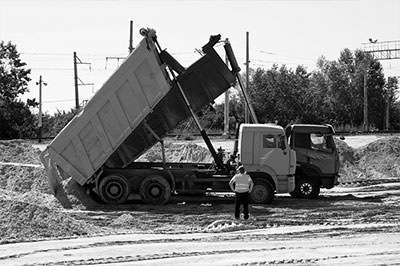 In Stroder v. Hill Corp. Energy Company, et al, 17-1086 (3 Cir. 4/4/18), the plaintiff drove a dump truck to a land based drilling rig to transport drilling mud from the rig for waste disposal. He testified when he saw the mud to be transported, he felt it was too fluid to be hauled in a dump truck. He was worried about the stability of the load and claimed he offered to return with another truck. He also claimed that that rig operator’s employees assured him it would be safe to use the dump truck.

Inevitably, a short time after driving away, Mr. Stroder encountered an “S” curve, the load shifted, the truck overturned, and he was severely injured.

Courts of Appeal review motions for summary judgment de novo. In other words, they don’t have to give the trial court’s ruling any weight and make their own review of the evidence on the motion.

In this case, the Third Circuit acknowledged that the federal law imposes a non-delegable duty on a carrier to secure its loads safely and ensure that the cargo is “properly distributed and adequately secured”. A carrier cannot be forced to accept an unsafe load.

If there is a case where the shipper assumes the responsibility for the loading, then it is only liable for latent and concealed defects in the loading, not open and obvious defects.

The Third Circuit stated that the issue before it was whether the “fluidity” of the mud was latent and concealed. Defendants argued that plaintiff knew that the load was dangerous based upon his own testimony. Conversely, the plaintiff argued he was an inexperienced driver “he had only been a commercial driver for three months” and relied on the defendant’s assurances of the safety of the load. In addition, the rig operator ordered the open dump truck and not some other kind of truck. It was not the plaintiff’s choice of truck, and Stroder claimed he offered to get a different kind of truck, but was assured that it was unnecessary.

In reversing the summary judgment, the Court of Appeal found that there were questions of fact about whether or not there was a defect in the loading of the dump truck which was latent and concealed even though the plaintiff obviously had his own questions about the safety of the load.

This case is important in that the Court of Appeal found that there was no case law in Louisiana on the responsibility of the shipper and the carrier in the loading of a truck. Therefore, it relied on the federal law stated above.

FAULT IN A MULTI-VEHICLE INTERSTATE COLLISION

The court put all of the fault in a three vehicle collision on west bound I-10 in St. Martin Parish on the rear ending driver on Boyance v. United Fire and Casualty Company, 17-876 (3/28/18).

The plaintiff was in the middle vehicle in the collision. Caldwell drove the first vehicle and had pulled his truck onto the roadway from the shoulder of the interstate. The plaintiff testified that she had to quickly brake and slow down from 70 to 40 MPH to avoid running into the back of Caldwell’s truck. While doing so, Crane ran into the back of the plaintiff and pushed her into the Caldwell vehicle.

The motion for summary judgment filed by Caldwell was granted. The Court noted that the plaintiff was able to slow in time and avoid the collision. In its view, Crane should have been able to slow down also. Crane admitted he did not see either vehicle in time to slow down and avoid the collision. At the same time, Crane argued that Caldwell created a sudden emergency by merging in front of the plaintiff at a low speed.

The Court noted that Crane was presumed to be negligent as the rear-ender and found there was no evidence to rebut this presumption case.

It seems to me that the dissenting Judge was correct. Caldwell had a duty to make sure he could clearly and safely merge onto the roadway before doing so and could have been assessed fault at a trial. It should be noted, however, that the plaintiff did not oppose the motion for summary judgment filed by Caldwell. The Court could safely grant the motion, and plaintiff would still have a right to recover again Crane. Crane was driving a commercial vehicle so he no doubt had sufficient insurance coverage for the plaintiff to make a full recovery.

In Jackson v. Wise, et al, 17-1062 (1 Cir. 4/13/18), the owner of an 18-wheeler contracted with a carnival organization to pull a Mardi Gras float in a parade. During the course of the ride, the driver of the truck made a turn which threw the plaintiff from the float. After being thrown to the ground, plaintiff was run over by the back wheels.

The truck at issue had been leased by the driver to Acme Truck Lines. The Acme Lease signed by the driver stated that he would only use the truck to transport Acme authorized shipments. It also specifically said that the truck would not be used for parades.

Plaintiff claimed that Acme was vicariously liable for the driver.

The Court did an extensive review of federal and state law to make a determination about Acme’s vicarious liability in that situation. It concluded that state law applied to the issues and found that the driver was not acting in furtherance of Acme’s business and was in specific violation of the Lease Agreement. Therefore, a motion for summary judgment in favor of Acme was appropriate.

THE RIGHT TO INDEMNIFICATION IN MULTIPLE ACCIDENT SITUATIONS

The Court dismissed the cross the claim on a motion for summary judgment. It found that under Louisiana comparative fault system, each tort feasor only pays for that portion of the damages caused by his action so there is no right to indemnity or need to make a claim for indemnification.

Please remember that any of these cases could be subject to further review and reversal by the Supreme Court and/or further jurisprudential or legislative action. The law is continually changing. Therefore, always look to update the cases and the law before relying on any
particular holding and seek competent legal advice.